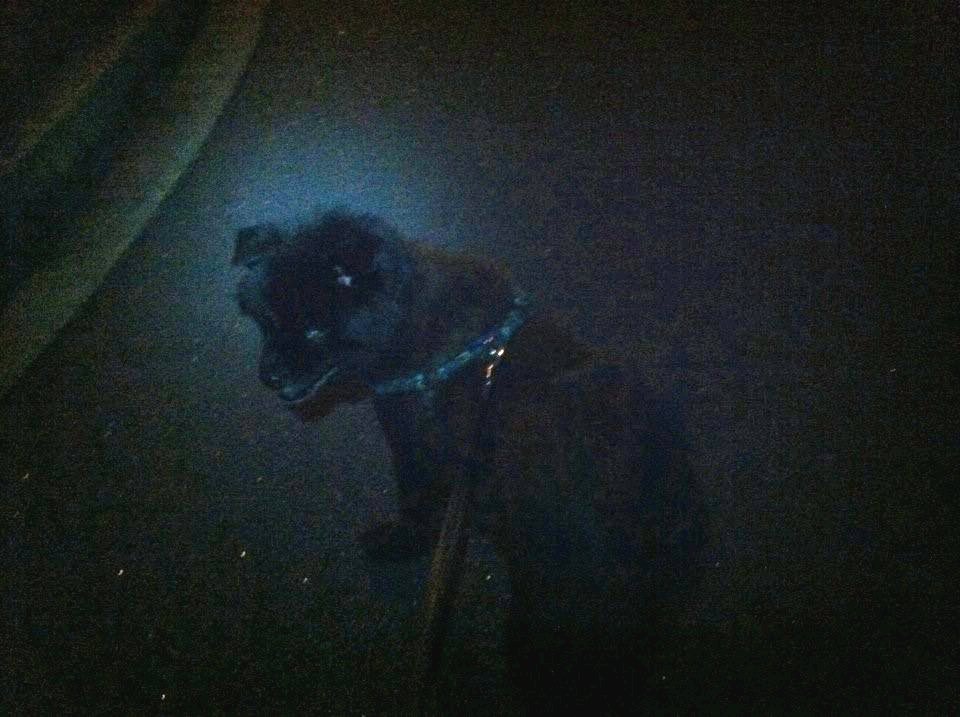 A month has gone by with nary a word from me or the augur. I like to think we have good reason for our silence: the fragile early morning writing routine I had established has been upended by my dog’s nighttime ramblings.

About a year ago, Huckie, my thirteen-year-old rescued chow chow mix, started getting restless at night, pacing and whimpering and barking. The vet suspected canine cognitive dysfunction (CCD), also known as “doggie Alzheimer’s.” Like humans with Alzheimer’s and other dementia disorders, dogs with CCD can become disoriented and fretful at night, a behavior referred to as “sundowning.” The vet prescribed a daily supplement for brain health as well as the veterinary form of Selegeline, a human Parkinson’s and Alzheimer’s medication. Unfortunately, the veterinary version has been unavailable for the past few months, so now I have to get the shockingly expensive human generic through my pharmacy. Needless to say, my dog is not covered under the Affordable Care Act.

The meds seemed to help for a while, but about three or four weeks ago–suspiciously contemporaneous with the last activity on this blog–my little buddy started sundowning again. Usually he begins about ten minutes after I’ve fallen asleep: nails clicking in the hallway, a little whining, a few snufflewoofs, and then a slumber-shattering tattoo of full-fledged, why-oh-why-have-you-forsaken-me barks.

This problem could easily be solved if Huckie were allowed to sleep in bed with my husband and me. But our former street dog showed early on that being permitted such a loft made him drunk with power. So he sleeps downstairs in our living room, but on occasions when we’ve forgotten to close the child gate at the top of the stairs, he may be nabbed napping right in the middle of our king-sized bed. We are currently considering ways we might accommodate him in our bedroom without a battle for the bed and without leaving him in the way of clumsy, somnambulant humans–that thing about letting sleeping dogs lie? Sound advice, it turns out. So for now, I sleep on the sofa downstairs, with Huckie curled up close beside me. Thus has it been for the past month.

I don’t mind sleeping downstairs with my dog. In fact, I feel good knowing I can offer him this small comfort. But this new sleep routine has totally thrown off my early morning writing routine. Perhaps I’m not as well rested after a night on the sofa as I am after a night in an actual bed, but at least it’s quiet. Until this past weekend, when I submitted to the idea that sofa-sleeping is the new normal, I stubbornly went to sleep in my own bed and waited for Huckie to wake me up, resulting in brutally short and choppy nights. Still, even with a full night of sofa shut eye, I find it difficult to rouse myself at 4:30 or 5 in order to get in the requisite two hours of writing time. I’m hoping that now that I’ve given over to the idea of a perpetual pack-of-two slumber party, I’ll be able to get back into the swing of things.

As of midnight tonight, I have a little extra motivation. This year, I have decided–nay, committed–to participate in National Novel Writing Month. By the end of November, I expect to have churned out no fewer than 50,000 words of new fiction, some of them possibly even arranged in pleasing, coherent, roughly connected sentences. The weekend before last I did a dry run and discovered that I could come up with the 1,667-word daily average in a little under two hours. I’m optimistic that I can make that happen thirty times over. But in order to achieve that goal, I’m clearing my calendar for the month of November–that includes going dark on this blog.

As it turns out, November is the perfect time for going dark and going within (perhaps the organizers of NaNoWriMo have known this all along). Tonight, pagans celebrate Samhain, marking the end of the harvest and the turning of a new year. In Greek mythology, it is the time when Hades carries Persephone away to the underworld, from which she emerges in the spring, bringing with her new plant life. Throughout the world people are remembering loved ones who have passed on, tending their graves and adorning them with candles and flowers. It’s near midnight and Huckie is already pacing and whining, perhaps sensing that I don’t intend to go to sleep anytime soon, in spite of the fact that I’ve assumed my post on the couch.

I used to entertain the idea that Huckie’s night fright was due to spirit visitations, perhaps the spirits of our departed cats. If my beloved felines were going to haunt anyone, it would be our dog, who unexpectedly entered our lives and household during their own twilight years, ruining any prospects of a peaceful dotage. Their cremains still reside on the shelf above where Huckie sleeps, awaiting burial in a flower bed next to the screened porch where they loved to sleep, blanketed in warm, filtered sunlight. Hour upon hour of sleeping. The kind of sleep an old dog dreams of.

Tonight the veil is thin. The witching hour is upon us. Bring on the darkness–we’ll face it together, Huckie and I. We’ll keep each other company on the night beat, me counting words instead of sheep.